Transformation Through The Elements

Fire, Water, Air and the Earth are the four elements of the world and of the Transformation Oracle cards by Sonya Shannon. According to the Greek philosopher Empedocles, elements are not only physical manifestations or material substances, but also know as spiritual essences. (Terasomia or The Doctrine of the four Elements.) All matter is comprised of four “roots” or the elements of earth, air, fire, and water. As Tracy Marks explains, fire and air are outwardly reaching elements, reaching up and out, whereas earth and water turn inward and outward. Empedocles declared that there are two great living, forces in the universe, which he called Love (Philotes) and Strife (Neikos).

Our bodies emotionally, astrologically, and metaphysically have all been broken down by these four elements. Most scholars agree that the physical universe is broken down into matter composed of these four elements, or roots. The interaction of the four elements is influenced by the relationship between the two great life energies of Love and Strife, of the inward and outward nature of things, of the hot and cold, moist and dry feeling of things. Love and strife break down to good and evil. The seen and unseen are all characterized as the four elements.

This belief in the four elements is still prevalent in western astrology and the alchemistic community today. The theory is that the four elements are not only material and spiritual forces but also facets of a human being, their varying combinations resulting in different personality types. Aristotle has shown in this translation:

…that by the conversion of a single quality in each case, fire Is transformed into Air, Air into Water, Water in to Earth and Earth into Fire. This is the Cycle of transformations. In Joseph Punek, paper he states that the creation of the physical universe is the manifestations of the four-elements fire, water, air and earth. He also states that human beings are physical creations. Human being exist in the material realm. Thereby, humane beings consist of and are governed by, the divine essences contained within, and expressed by the four elements.

The Intuitive Aspect of Elements

The zodiac mixes twelve human natures, which are a combination of the four elements in various quantities. Astrologically (and like the Transformation Oracle) the four elements have an intuitive side to them. According to Joseph “Joe” Panek these are visible and invisible, masculine and feminine, thoughts and feeling. Our bodies also contain all four elements, exhibiting at times signs of disease and disruption on the material level as well as the spiritual level. The predominate element, can also come from our character. It is key to sustain harmony at the spiritual level, because what transpires on the outside is the manifestation of our inner spiritual being. Card reading helps seekers to clarify where they are emotionally and physically along their path of transformation.

The Four Elements and Astrology 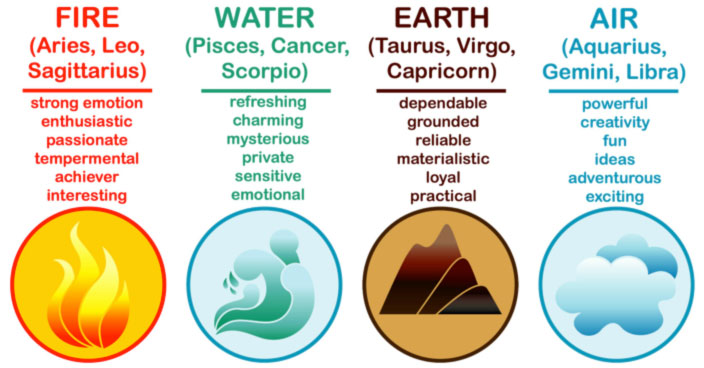 The following section draws upon an article called “Finding Your Element and What it Means,” by Cara Hebert . 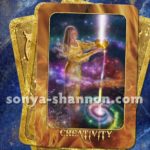 The Fire element (choleric) is said to be forceful it is the masculine principal which radiates. SpiritualKnowledgeNet states that fire manifests as one of the visible active elements. Fire has electrical and creative properties lighting the soul’s path, like the CREATIVITY card. Fire nurtures and sustains, providing heat and light. A Fire personality can be the life of a party. The Fire person’s intensity makes them a natural born leader. Fire passion can easily turn negative and angry spreading like a wild fire or the RENOVATION card, hurting the ones closet to them. A single spark can set off a forest fire. As a result, Fire signs need to be nurtured and managed carefully. Fire needs other elements to survive. While Air will make it grow, Earth will keep it burning steadily. The character of fire is the same; loved ones are what motivate you and keep you stable. Without them passions can turn to obsession and the fire will quickly burn out. Fire Signs are: 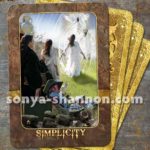 The Earth element (melancholic), according to the Transformation Oracle Workshop Handouts, is said to be the feminine principle, which receives (Mother Earth) passively. Earth governs the material, physical and the sensual, as seen in the GENEROSITY card. Earth manifests itself as one of the visible elements. Earth is stable, reliable, and conveys the idea of being “grounded” on the planet. The Earth personality is practical and logical, standing firm in their convictions. As a curious person, those ruled by Earth learn best though experience, which is never really difficult. An Earth element home is welcoming and always open to friends and family. This is fitting considering Earth signs are a bit of a homebody. They are very loyal and can sometime be a bit over protective. Stubborn and bull headed at times, an Earth person sticks steadfast to his or her opinion only because it is theirs. Earth is the Being and the End, like the SIMPLICITY card. Earth Signs are: 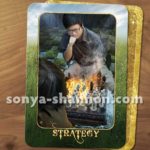 The Air element (sanguine) represents the masculine mental principle: an active element the conscious, rational mind where thoughts and ideas are created. Air is constantly in motion even though you cannot see it. The Air personality is studious and scholarly, able to see the big picture when other may not. Speech comes from the element of Air. Witty and entertaining, communication can sometimes be strained because the social graces may be lacking. The Air person sometimes forces logic and can overlook others’ feelings. Traditions can be set aside, as the Air person reasons with what makes sense to him or her. Thought can be clouded and confusing, whirling all around like the DIRECTION card. Others see this quick mind as “radical thinking.” While Fire may be the face of the uprising, Air is the brain behind it – like the STRATEGY card. The heavens above are where we gaze for inspiration and guidance. Air Signs are: 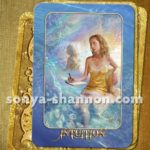 The Water element (phlegmatic) represents the feminine spiritual principal in the intuitive subconscious. Tt is a passive element. Water is always flowing taking the path of least resistance, like the SURRENDER card. It can be calm or a raging torrent conquering everything in its path. Compassionate and caring, Water personalities can relate effortlessly to others in a whole-hearted way, which can make them overly trusting and gullible. Emotions ebb and flow just like a river, as seen in the INTUITION card. When spread thin, emotions can be easily controlled; yet when focused into a narrow channel the emotions are a force to be reckoned with. To find harmony, Water personalities must balance learning to help themselves before helping others. Water Signs are:

The Transformation Oracle is internally intertwined with the qualities of all four elements to help us on our path to transformation. 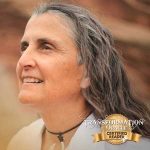 Get a Transformation Oracle
READING with Cynthia!